A friend of mine created a spreadsheet to calculate how much it would cost him to change to a new mobile phone provider. The result scared him to death. According to his spreadsheet, based on his expected usage (he’s a low user) it was going to cost him almost £500 per month!

When I examined the spreadsheet I found that adding 4 brackets to the formula was all that was needed to generate a more accurate and realistic figure of £18. The contract provided 120 “free minutes” of talk time and 100 free SMS messages each month. 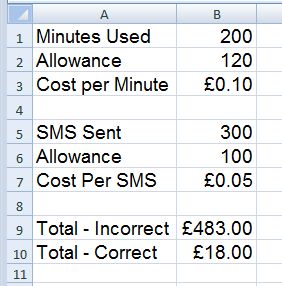 So why the huge difference?

To help answer that, lets look at a question that somebody posted on my FaceBook feed recently…

Hundreds of people had replied and provided various answers, including 56 (incorrect) and 50 (correct).

So why 56? Well, many people calculate the answer by working from left to right…

OK, so we know what DMAS stands for but what about the B and O?

The O..well that depends who you speak to and what websites you read. Some say it stands for “Of”, for example 2 to the power of 3.

But there’s more…I’ve also heard it called BOMDAS, although because multiplication and division are ranked equal, it doesn’t matter which is calculated first. Some people say it’s simply that BODMAS is easier to say that BOMDAS! My American colleagues refer to it as PEDMAS or PEMDAS – P stands for Parentheses and E stand for Exponential.

Whatever you call it, the important point to remember is that whenever you need to work out part of the calculation separately, use brackets/parentheses.