In my last tutorial I showed you how to convert text-based numbers to numeric values. Not only were the numbers stored as text, they also had the comma and decimal point reversed (at least they did for my UK customer).

If you missed the tutorial or want a reminder, you can click here to read it.

Anyway, a follow-up question was posed…

“All the numbers in the example contain a single comma. What if there were multiple commas and can the formula be flexible to account for any number of commas?”

I found a solution to this problem as follows:

Up to Column C, the formulas are the same as those in the original spreadsheet: 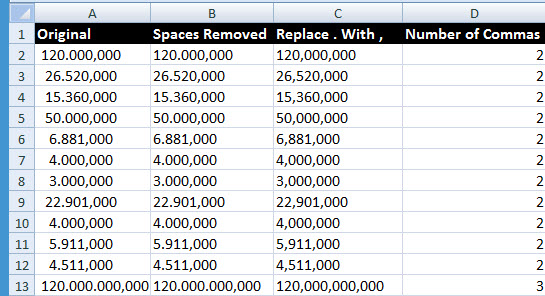 Ultimately, I need to replace the LAST comma with a decimal point. The function in column D counts the number of commas in the corresponding cell in column C.

The SUBSTITUTE function substitutes one character with another – in this example it replaces a comma with nothing – in other words, it’s actually removing the commas…

LEN(SUBSTITUTE(C2,”,”,””)) counts the number of characters in the resulting string

So using some logical thinking, the difference between LEN(C2) and LEN(SUBSTITUTE(C2,”,”,””)) is the number of commas in the string.

The function in E2 has been amended. Originally it was

The final argument (2), indicated that I wanted to replace the SECOND occurrence of a comma with a decimal point